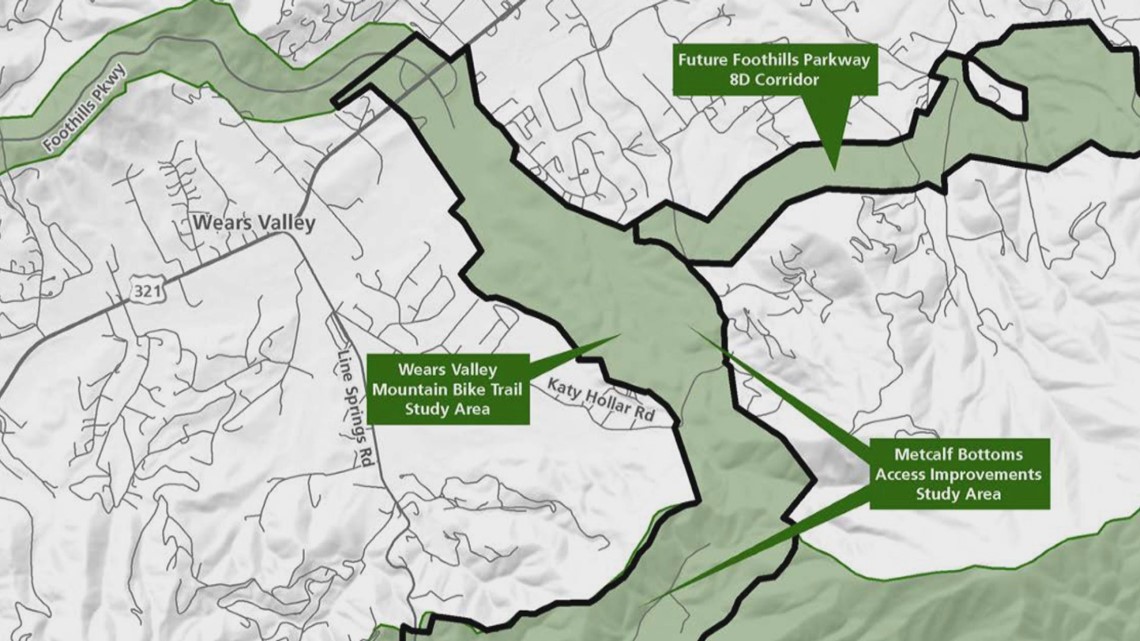 GATLINBURG — Those who logged protests against a National Park Service plan to carve a 14-mile mountain bike trail network through the forest off Foothills Parkway said they still opposed the plan despite federal conclusions it would not adversely impact the natural environment of the area.

“I’m very disappointed,” said Donna Edwards, an outspoken conservationist who lives in Walland and participated in the public scoping process. “What are (the) reasons for choosing the alternative with the largest footprint and greatest environmental impact?

“I fail to understand why mountain bikers’ needs are considered to be more important than those of birders and hikers, considering the extensive mountain bike trail networks in other areas of East Tennessee.”

She said arguments against approving the Wears Valley mountain bike trails were wise and well documented.

A proposed off-road bike trail in the Wears Valley section of the Foothills Parkway that would be operated by the National Park Service has overcome a procedural hurdle but appears to be no closer to actually being built due to a lack of funding.

An environmental assessment to determine the project’s potential impact on wildlife and the environment led to an official “Finding of No Significant Impact” (FONSI), park officials said in a press release issued Thursday.

“We understand the public’s desire to have a purpose-built bike trail, and this marks a step for potential future development of a trail in Wears Valley,” said Cassius Cash, superintendent of the Great Smoky Mountains National Park. “Having the signed FONSI allows us the opportunity to explore potential funding paths for both the construction and the annual operational costs.”

The proposed Wears Valley Mountain Bike Trail System would be built in an area that the park service maintains is exceptionally desirable for recreational development.

The initial launch of public comment for the proposed Wears Valley mountain bike complex was covered by Hellbender Press.

“While more than 800 miles of trails exist in the Park, fewer than 8 miles are designated for biking. Public roads within the Park are open to biking, but no purpose-built mountain biking trails currently exist,” the release said.

An environmental assessment is required under the National Environmental Policy Act on most federal lands prior to any potential disruption to public natural resources.

The Wears Valley assessment took a look at three possible plans for a system of bike trails as well as examining the impact of not developing the land at all.

Park system officials said they ultimately selected one of the plans after reviewing the assessment and considering public comments. Nothing, however, will be done unless “construction and annual operational monies” are made available.

The trailhead would feature amenities like a bike wash and repair station, restrooms and picnic tables. An informational kiosk for orientation, trail etiquette and rules for mountain biking would also be built at the site, according to the release.

The next steps will include a business analysis by the park service to examine possible strategies for how the proposed mountain bike trail system would be operated. For instance, the park service could choose to operate a concession/bike rental building or a fee collection station, depending on the identified operational strategy.

The Foothills Parkway currently runs from Chilhowee Lake to Wears Valley, and from I-40 in Cocke County to Cosby. A plan is also under way to complete the remaining section that would connect from Wears Valley to Cosby, thus finally completing the parkway that was planned by 1940s-era federal planners.

More in this category: « Hellbent Profile: Amber Parker brings nature to the people The electric-vehicle revolution brings environmental uncertainty at every turn »
back to top